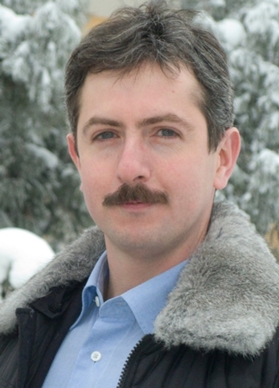 Prof Grigorii Sokolovskii is the Leading Research Fellow at the Ioffe Institute (St Petersburg, Russia) and a Professor of Optoelctronics at the St Petersburg State Electrotechnical University.
His main research interests include integrated optics, physics of semiconductor lasers and nanoelectronics. He has authored and co-authored over 130 research publications, books and patents on these topics. In 2010 he was awarded with Marie Curie Research Fellowship to be held at the University of Dundee. He also serves as the Vice-chair of the St Petersburg Chapter of the IEEE Photonics Society.

Grigorii Sokolovskii was graduated from the St Petersburg State Electrotechnical University (LETI) in 1994 (MSc, hons) and received PhD and Doctor of Science degrees from the Ioffe Physico-Technical Institute (1998 and 2010 correspondingly). In 1998 he was appointed as the Executive Secretary of the Educational Centre of the Ioffe Institute. He has held this position for five years under the leadership of Prof Zhores Alferov (Nobel Prize in Physics, 2000) and played one of the major roles in organization of the first in Russia Educational Centre of the Russian Academy of Sciences from the beginning to the separation from the Ioffe Institute.

Prof Sokolovskii holds a broad network of the international contacts and plays a leading role in a number of international projects. After the Royal Society Research Fellowship award in 1998 he has hold a position of the Visiting Research Fellow at the University of St Andrews.

In 2006 he was appointed as the Coordinator of the St Petersburg Regional Technology Commercialisation Centre for the 3.2M Euro EC Project “Science and Technology Commercialization” (EUROPEAID/115381/C/SV/RU). He was coordinating the work of the international team of technology commercialization experts, managers and scientists.In 2003 he was awarded with the State medal “300 St Petersburg anniversary” for his research work. The same year he was a winner of “Knowledge-innovations” competition devoted to the 300th anniversary of St Petersburg, and in 2007 his work was awarded with the Silver Medal of the International Innovation Congress “Hi-Tech” (St Petersburg).

Prof Sokolovskii is a member of several scientific councils, including the Council of the Ioffe Institute on the International Relations.
He is the Chair of the PhysicA.SPb Conference (1999-present), also he was heading the Local Committee for the Annual Venturing Seminar “Russian Technologies for Industry” (2006, 2007). He serves for the programme committees of a number of international conferences, including Laser Optics. Prof Sokolovskii is the Vice-chair and Treasurer of the St Petersburg Chapter of the IEEE Photonics Society (former IEEE Laser and Electro-Optics Society, LEOS). Since 2011, he is also a Professor of Optoelectronics at the St Petersburg State Electro-Technical University (LETI).